This June 16th is a significant Youth Day in South Africa. We are commemorating 40 years since the 1976 Soweto Uprising, where thousands of young people sacrificed themselves to protest against the Apartheid Bantu Education system. Today, we draw inspiration from the youth of 1976 in their determination to change the status quo and seek a better a life for themselves.


At enke, we work with young people who are doing what they can with their talents and skills to change a situation that negatively affects their communities. Our Trailblazers are bold self-starters who, like the youth of 1976, blaze a trail for others to see that it is possible for youth to be leaders in their community and work towards positive social change.


In commemoration of this special Youth Day and 40th anniversary, each day this week we will be sharing stories of youth taking action and leading change in their communities. We created this series in partnership with Meghan Daniels, Creative Director & Founder of Illizwi Photo Club. We hope their stories will inspire you and help you see the value of investing in youth. 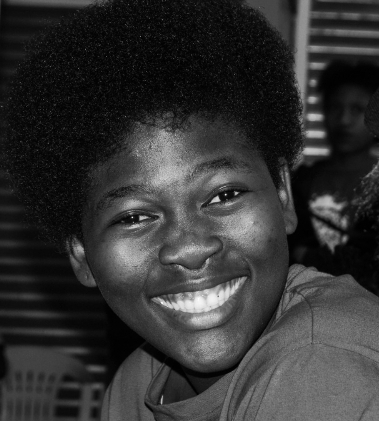 It’s 27 February 2016, and a line of youth stretches from the entrance and around the main hall of Zolani Sports and Recreation Centre in Langa. They stream into the hall, sign in their name, and find a seat in front of a large drop-down screen. They have all come at the invitation of Dineo Jaca, a Grade 12 learner from Gugulethu, who is screening short films raise awareness around human trafficking and sexual abuse. We look for the young woman responsible for organizing the event. Dineo is in the kitchen in the back, helping her team prepare and package hotdogs as snacks for the crowd. “Dineo, look at what you’ve done. Do you know how many people are out front?!”

She laughs, and coolly responds, “I try.” Earlier this year, the bodies of Khayelitsha teenagers Sinoxolo Mafevuka and Anelisa Duluze’s bodies were found, raped and murdered after having gone missing for several days. There was anger amongst friends, family and the community at large; a perception that protecting the lives of young black women is not a priority for those in authority in this city, Cape Town. A question was posed at Anelisa’s memorial service, “the lives of all women should matter. But why does it seem that the life of the Black African child matters less?”

Dineo worked closely with filmmaker, Pam Zokufa, from the Media Campaign Against Human Trafficking (MeCAHT), to make the film screening at Zolani Sports and Recreation Centre possible. At this event, three films that Zokufa has worked on, were screened. One of these films includes ‘Portia’ which deals with the experiences of a young woman trafficked from the Eastern Cape. ‘Portia’ is a true story based on the life of Grizelda Grootboom. Sitting amongst a crowd of youths, Grootboom walked on stage and shared her personal experience of being trafficked at the age of 18. After the film screenings and talks from guests such as Grootboom, Dineo opened dialogue sessions with the crowd.

When it comes to sexual abuse and rape culture, women are always given various precautionary methods to prevent themselves from being harmed. The dialogue held at Dineo’s Film Screening went beyond this. Questions were posed for men to think about and discuss, both introspectively and with others, issues surrounded masculinity and patriarchy and what they can do to start challenging this culture and stop violence perpetrated towards women.

Dineo is one example of the hundreds of youth that have been part of the enke: Trailblazer Program and implemented successful projects that have real impact in the lives of their community. The reason for her success is similar to that of many others – the project and the issues addressed are driven by personal experience and passion.

She states, “Last year there was a car driving around our school trying to traffic young women. 5 girls were trafficked.” She continues, “What made my heart do this [project] was realizing that one of these girls was a grade 12 student. She had dreams, her life was about to begin and then this just ended.”

Dineo’s goal is to prevent further cases like this happening. Since speaking about her CAP and sharing the knowledge she gained from her own research, she says she helped her younger sister. “One day my sister was on her way from school and a car drove pass and tried to trick her into the car. Because I spoke to my sister about trafficking and my CAP, she knew what was happening and didn’t get into the car.”

When speaking about how enke has inspired her to start her initiative, Dineo states that “Enke lit up the candle within me. Enke not only enables us to learn more about our communities but also about ourselves. I realized that I am capable of making a difference in Langa.”

Dineo’s initiative addresses the question that was posed at Anelisa Dulaze’s memorial service; the life of the Black African child does not matter less – it is a system of structural and systemic violence that has made it seem that way, but this should not be the case. Through personal experiences and the spark that enke ignited, Dineo is working to address pertinent issues surrounding sexual violence in her community – not only by starting dialogue with women but also including men in the conversation.

The line of youths stretched from the entrance and around the main hall of Zolani Sports and Recreation Centre to view the film screenings on human trafficking and sexual violence. Each one of them left spreading their new-found awareness to others around them.

Dineo Jaca was a participant in the 2015-16 enke: Trailblazer Program, a 9-month long youth leadership and social action program that starts at the enke: Forum. As part of the Trailblazer Program, high school youth are encouraged and supported to start Community Action Projects (CAPs) – a project that tackles a social issue that the young person cares about. Throughout their implementation youth receive dedicated support from enke – troubleshooting implementation challenges as well as emotional and morale support. Through this, we hope to inculcate a culture of youths being proactive and taking action as opposed to waiting for someone else to do so. Beyond that, the youth gain entrepreneurial skills and a mindset that last a life time. Find out more at www.enke.co.za

For more information on COVID-19 and government regulation: Click here